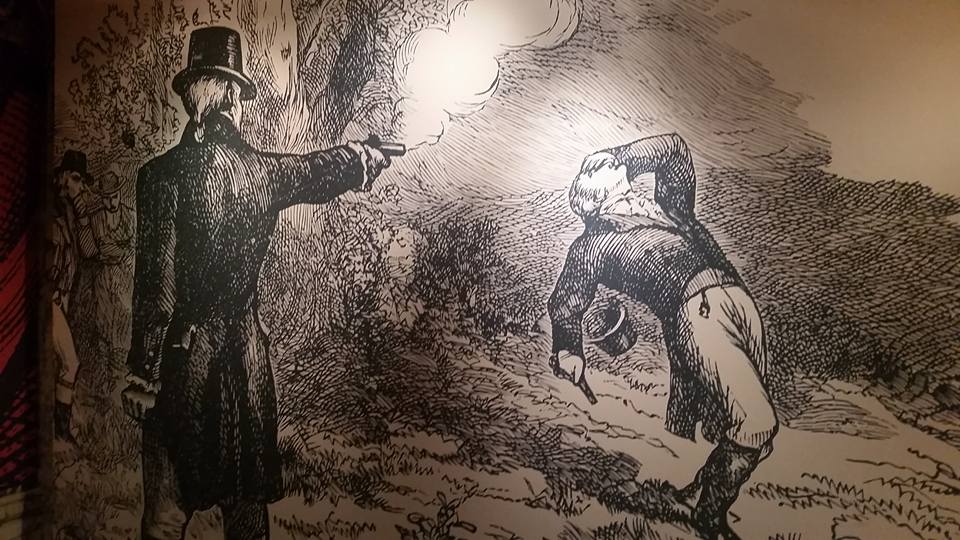 If you know me, then you’re probably thinking, “It was only a matter of time before APS talked about Hamilton’s ghost.” Truthfully, I wanted to cover Hamilton for a while, especially after Lin-Manuel Miranda’s hit musical took off. I have alway had a fascination for hauntings that surrounded the Revolutionary War as well as the Civil War. I found the concept of historical figures haunting famous locations. If we truly believe in ghosts and hauntings, then how cool would it be to talk to THE George Washington or Alexander Hamilton himself?

I try to make an excursion to New York City once a year to see some of the latest Broadway shows and just enjoy being in the city. I had always wanted to live in NYC for a time, but so far, it’s still a dream from my home in Raleigh, NC. Whenever I get into a new show, I always have to know the back story of the historical events, the writing process, and more. I approach paranormal investigations in a similar manner. Hamilton resonated with me not just because it’s a groundbreaking show, but it shed light on one of the least popular founding fathers, both historically and socially. After becoming OBSESSED with the musical, I got Ron Chernow’s book that inspired Miranda, and I dove into this chapter in Revolutionary War history that I was unfamiliar with.

Can you guess what was the first thing I looked up? Yep. Ghosts. Was Alexander still haunting a part of New York City? Who knows…but I wanted to see what the scoop was if there was anything there. I found a few stories of Hamilton supposedly haunting the area around his tomb.

In July 2016, I had a chance to go to NYC since I was lucky enough to snag tickets to Hamilton. I decided to make it a whole trip dedicated to Hamilton. There was a wonderful exhibit at the New York Public Library with actual copies of The Reynolds Pamphlet, Farmer Refuted, and even drafts of Washington’s farewell speech. We also went to Weehawken to the dueling grounds where Burr and Hamilton went head to head. We even went to Trinity Church to pay our respects to the Hamiltons along with other historical figures buried there. The only area I didn’t go to was where Hamilton died. Mostly it was due to time. But, I learned that I need to be putting this amount of energy into all my historical research endeavors, ESPECIALLY the paranormal. My boyfriend showing off Hamilton’s bust near the site of his duel with Aaron Burr in Weehawken. The stone where Hamilton supposedly rested after the duel

Hamilton died in his friend’s, William Bayard’s house in Greenwich Village. The address of the location was at 80-82 Jane Street, however, historical maps have since proved that to be inaccurate, which I’ll get into in a moment. He was treated at 27 Jane Street where the doctor, John Francis lived. Jean Karsavina, who resided in the house starting from 1939, experienced footsteps, creaks, the chain on the toilet swinging, and saw blurs and shadows. This story was covered by Hans Holzer, and it indicates the house where John Francis lived, the doctor that attended Hamilton on his death-bed, is haunted. You can read the full story here,

NOTE: There is a plaque at 82 Jane Street says that Hamilton died in that home. Bayard’s house was actually a block further north of the plaque. More details at the end.

Around the time that Hamilton became a smash hit, it was reported that paranormal activity really got stirred up at 71 Jane Street (which is across the street and a few houses east from plaque). The New Yorker Radio Hour sent Becky Cooper to a séance that attempted to raise Hamilton’s spirit. Since Joe Hamilton (no relation) bought the house in 1994, she and her family have experienced weird noises and crashes that were so loud to the point where they had to wear ear plugs. When Joe was remodeling the house, she was told to leave the plans out so that Hamilton could see them. Usually, you hear a lot of activity happening during the remodeling of a home. But in Joe’s case, she left the plans out and things were fine. Irene Connors, who owned the house before, believes that Alexander Hamilton’s ghost resided in her home. She actually saw a man with knee-length trousers, he was slim and wore a white powdered wig. She reportedly saw his face a few times.

If Hamilton’s ghost is indeed reappearing since the musical came out, it kind of makes sense. Lin-Manuel Miranda ensured that Hamilton got the recognition and legacy he worked so hard for. After years of being nearly forgotten, except for who we saw on the $10 bill, to everyone knowing his name and becoming obsessed with his story, perhaps we’ve given Alex some energy to make himself known again? They brought in a medium, and she didn’t pick up on Hamilton but sensed a child. Using an Ouija board, she asked what the child what their mother’s name was, and it apparently said, “Eliza.” I don’t want to spoil it, so you can listen to the 15-minute segment below. There were thoughts that it was Hamilton’s older son, Philip, who also died in a duel in 1801 before Hamilton. Then there is a theory that because baby Philip (who was named after his older brother) was brought into the room where Hamilton died so that he could give his father a kiss goodbye while on his deathbed.

Is it because of Miranda’s musical that the spirit of Alexander Hamilton has found new life, so to speak? Given that so many people lived in these houses around the area for over 200 years, it could be anyone haunting 27 Jane Street or 71 Jane Street.

Question About the Houses

I did some digging on Google Maps to see what I could find of these 3 addresses, plus the possible location of the Bayard Estate. According to Google Maps, 27 Jane Street is now an empty lot Here’s a map of NYC sketched in 1767. You can see where the Bayard Estate is under the title, “Mr. Bayard.”

Looking at the maps, here’s the approximate location of Bayard’s Estate as it stands today even though the original buildings are likely gone. 27 Jane Street is the bullet point on the right under the Art Bar.

NOTE: The midway point between the plaque at 82 Jane Street and Bayard’s House supposed location is…you guessed it: 71 Jane Street. Coincidence? You tell us!

3 Responses to Alexander Hamilton: Haunting More than the Theatre