10 Ships That Will Haunt Your Dreams 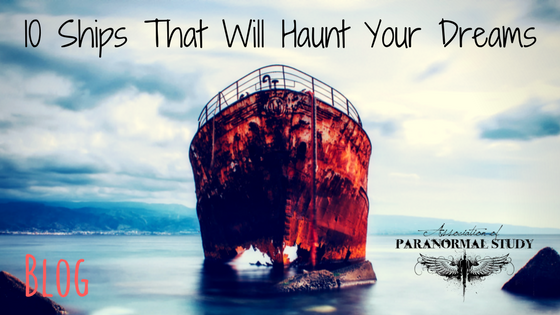 Hauntings don’t just happen on land, but ghosts seem to favor the seven seas! Unsurprisingly, it seems that the majority of haunted ships are tied with the military and combat. There are theories as to why this is, which I’ll get into throughout the list. I’ve had the honor of investigating four of the ships on this list. Some officially, and another unofficially. I’m excited to say that I’ll check another one off this list on Saturday, March 17th, 2018. I’ve always had a fascination with haunted ships. Perhaps it started with my fascination with the Titanic. I became enthralled with the different histories of ships and how mysterious they were as they went about their business in the open ocean. I’ve tracked down ten of my favorite. Well, I should say nine, as one of them is a submarine! The USS Lexington, CV-16 has rightfully earned the title of “ghost ship.” This is not only due to the ghosts that have been reported, but the Japanese Navy reported sinking this vessel 4 times. The ship is known by a few names like “Lady Lex” and the “Blue Ghost” and she was commissioned in 1943. She was originally supposed to be named “Cabot”, but the USS Lexington CV-2 was lost at sea, so the CV-16 was renamed. Lady Lex’s record is quite impressive as she set more records than any other Essex Class carrier. The ship is docked in Corpus Christi, Texas and operates as a museum. Staff have reported sightings of at least two sailors and a Japanese pilot. There is also a red-haired sailor who was reported giving tours of the engine room, with visitors unaware they had their own “Ghost Host.” The USS Salem is located in Quincy, Massachusetts and it is the world’s only preserved heavy cruiser. The ship was built in the 1940’s and was nicknamed the “Sea Witch.” In 1953, the ship rescued earthquake victims in 1953 in Greece. It also served as a hospital as well as a morgue for the earthquake victims. This was where the USS Salem apparently gathered their spirits from this occurrence. The lives lost during the earthquake have seemed to call the ship their permanent home in the afterlife. Perhaps this is a form of cheating since this isn’t technically a ship…but a submarine for the Confederate States of America. The H.L. Hunley was the first combat submarine to sink a warship, but it disappeared right after. The submarine was built in 1863 and launched in 1864. The Hunley sank two previous times before and killed her entire crew each time, including Horace Hunley himself. That alone showed the dangers of undersea warfare and perhaps something that the CSA shouldn’t have pursued. On February 17, 1964, the Hunley shot a torpedo at the USS Housatonic and sank the warship. The Hunley then disappeared and the fate of her third crew remained a mystery. The Hunley was located in 1995 with the remains of all eight members still inside. At first, it was believed that the crew died from running out of oxygen. It was later determined that the crew died from the blast of the torpedo that struck the Housatonic. You can see their facial reconstructions here.  In terms of paranormal activity, this is really under the radar as this information was divulged to me by a third part. But phantom voices have been heard around the original submarine as well as shadow people. Even if it’s not haunted, the Hunley has an amazing story. In Duluth, Minnesota, the SS William A. Irvin has been delivering scares and frights for a while. In 1964, a seaman was scalded to death in the boiler room, which is nothing short of a terrible end of life. Other former crew members are rumored to be haunting the flagship of the U.S. Steel’s Great Lakes Fleet. The ship worked as a lake freighter from 1938 until 1975 before becoming a workhorse fleet until 1978. It just goes to show that not all haunted ships are warships, nor do they have to see any combat.

Between 1943 and 1974, 140 men lost their lives while serving on the USS Yorktown CV-10. As with any good ghost story, it is believed that those 140 souls never left the ship. Nicknamed the “Fighting Lady”, the ship was a WWII era aircraft carrier that also served in Vietnam. It was originally supposed to be named the “Bon Homme Richard”, but it was renamed “Yorktown” in honor of the CV-5 that sank during the Battle of Midway. The ship was upgraded to a CVA, also known as an attack carrier, in the 1950’s. The ship also helped recover the Apollo 8 astronauts and the capsule. In terms of hauntings, people have reported hearing mysterious voices, seeing shadow figures (including one named “Shadow Ed”), pans being thrown, and footsteps. The USS Yorktown is docked in Mt. Pleasant, South Carolina near Charleston. Located in San Diego, California, the Star of India is one of those landmarks I grew up with. Built in 1863, the ship sailed the world 21 times before calling San Diego home. School trips, acting gigs, and more…the Star of India is one of the most fascinating places in the world. At least to me. The haunting that lives on the ship is rather malevolent though according to my comrades. I didn’t experience that when I investigated the ship. The ghost is believed to be of a stowaway who hid in the ship and then fell to his death, and there are cold spots where he hit the deck. The ghost has been blamed for the death of a volunteer who fell to his death from the ship’s rigging in 2010. Do I believe that? I don’t know. It’s a coincidence at most and a tragic accident.

The USS Hornet was the first aircraft carrier that I officially investigated. Officially meaning that I was there to ghost hunt and not me sneaking in an audio recorder just to see what I can capture. It was an incredible experience once I went about on my own with another person. The ship does have a “ghost tour” where they will tell you where things happen and what to expect. While I was in the sick bay, I saw anomalies that were ever-present in front of my eyes. You can read more about my experience at The Paranormal Can Be a Gift. People have reported hearing voices, footsteps, and apparition throughout the ship. Considering the ship’s history with World War II and the subsequent awards that were earned for her valor, I’m not surprised. Another San Diego staple is the USS Midway. While I was living in America’s Finest City, the Midway Museum was not receptive to having any sort of paranormal team investigate the premises officially. I believe this may have changed but the only sanctioned investigation that occurred was by the San Diego Ghost Hunters. The ship was commissioned one week after the end of World War II and it was the largest tonnage ship in the world until 1955. The Midway saw action during Vietnam and was the flagship during Desert Storm. Stories of the haunting on the ship include the sighting of over 30 ghosts in the halls. However, as mentioned before, the staff and volunteers stay mum about paranormal activity. For me personally, I have recordings of strange voices, but given it was in a public location, it’s easily debunkable. The Queen Mary has a special place in my heart and is one of my favorite ships that I’ve investigated. The ship was repainted grey served as a troop transport ship during World War II, thus earning the name, the “Grey Ghost.” Also during World War II, the Queen Mary rammed into one of its escort ships and caused it to sink. Rumor has it that if you stand at the bow where the collision happened, you can hear screams. While it served as a passenger liner, around 49 people died. When APS investigated the ship in 2013, we conducted the Ganzfeld Experiment and Jay felt a connection with a fireman named John Pedder who lost his life in the engine room after being crushed by Door 13. The swimming pool of the Queen Mary is also believed to be haunted by a little girl as well as others who supposedly drowned. Of course, the latter part isn’t verified. When APS was at the ship, we had medium Annie Radzus with us and we encountered some weird energy in the changing rooms. A man with blue overalls has also been spotted, and Stateroom B340 is no longer reserved because faucets turn on by themselves and sheets fly off by themselves. The ship serves as a hotel today, and there are regular paranormal tours in Long Beach, California. The USS North Carolina is one of the most decorated warships of World War II. She was one of the first battleship to arrive in Hawaii after the attack on Pearl Harbor. She was welcomed with a celebration and sailors said that the ship was “the most beautiful thing they had ever seen.” The ship was active between 1941-1947 and sat dormant until 1960. She was saved from being used for scrap metal thanks to the people of North Carolina. She participated in every in every official naval offensive in the South Pacific and was even present during the armistice between the United States and Japan. She was considered to be the protector of aircraft carriers and fueled the tanks of destroyers every 3-4 days. In August 1942, she first saw combat while protecting the USS Enterprise. The USS North Carolina is the fourth vessel to bear the name, with the first USS NC being launched in 1820 and then sold for scrap in 1867. There was another ship named North Carolina, which was a CSS for the Confederacy and built in Wilmington, North Carolina. She sank in 1864 near Southport, North Carolina. The second US Navy ship named North Carolina was an Armored Cruiser 12 commissioned in 1909 and decommissioned in 1921. The third ship was known as Battleship 52 and it was never completed. In terms of hauntings, people have reported hearing voices, seeing shadow figures, full body apparitions, and even being touched. There have been numerous deaths associated with the USS North Carolina, and you can see a comprehensive list here.