Stones & Their Uses in the Paranormal 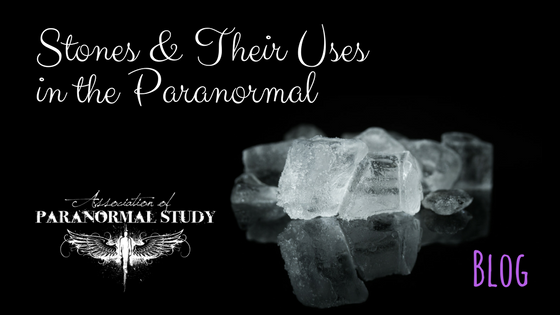 Many of us are drawn to the beauty of natural stones. Their physical qualities are strongly desired and can embellish any outfit, piece of jewelry or mood. But did you know that crystals hold powers that are far beyond the physical realm? For thousands of years stones have been used in everything from Occult rituals to religious blessings. Everyone from Native Americans, Ancient Royalty and many religious denominations including Christianity have used them for the mystical powers they are believed to possess. The ancient Romans used amulets for protection in battle. Egyptians often buried their dead with a quartz crystal placed on their forehead because they believed that it would help guide them into the afterlife. The Greeks rubbed crushed Hematite on the bodies of their soldiers before battle believing that it would make them invincible.

Because of their electromagnetism, which was proven by James Clerk Maxwell, we can use the vibration frequencies that crystals emit in many different ways in the paranormal field. Their vibrations effect our nervous system and the transmission of information to the brain. This can amplify our clairvoyant abilities and ability to communicate and experience these paranormal happenings. They can also effect the activity that occurs during paranormal investigation either by use of the investigator or the spirits themselves. Some are used to ward off negative entities and others used as a conduit of sorts to further activity. Some are even used in the process of “crossing a spirit over” or moving them on to their final destination. However used, worn or carried, I find them to be an integral part of the process.

I personally carry Obsidian and clear Quartz on every investigation I have ever done. I use the Obsidian to protect me from any harm-doers and the clear Quartz to keep my mind open and clear for any transmission. One of the more versatile and powerful stones in Selenite. It is used to enhance psychic awareness and intuition largely due to it’s direct effects on the 3rd eye chakra. It also clears energy allowing you to be completely open to accept any unseen energies that may be around at the time. Many investigators and mediums consider this stone to be the most important of all the stones to have during an investigation as well as in everyday life.

There are many Minerals and Crystals that can be an important tool during communication with the spiritual realm. You will find some of them listed below. It is up to you to decide which ones are best suited for your needs. Also up to you, is the discernment of whether these stones do actually have these powers or if the real power is in the belief in them. Either way, I am sure that you will find them useful none the less. Remember to cleanse your crystals after each use and some of them need to be charged in the sun or moonlight for best results. Happy Hunting!

Please note that the stones listed have many purposes and powers, I have only listed the ones useful in investigation situations

Do you use utilize stones in your life or in your paranormal research? Tell us about it in the comments!

3 Responses to Stones & Their Uses in the Paranormal