The Terrifying True Story Behind Disney’s The Haunted Mansion 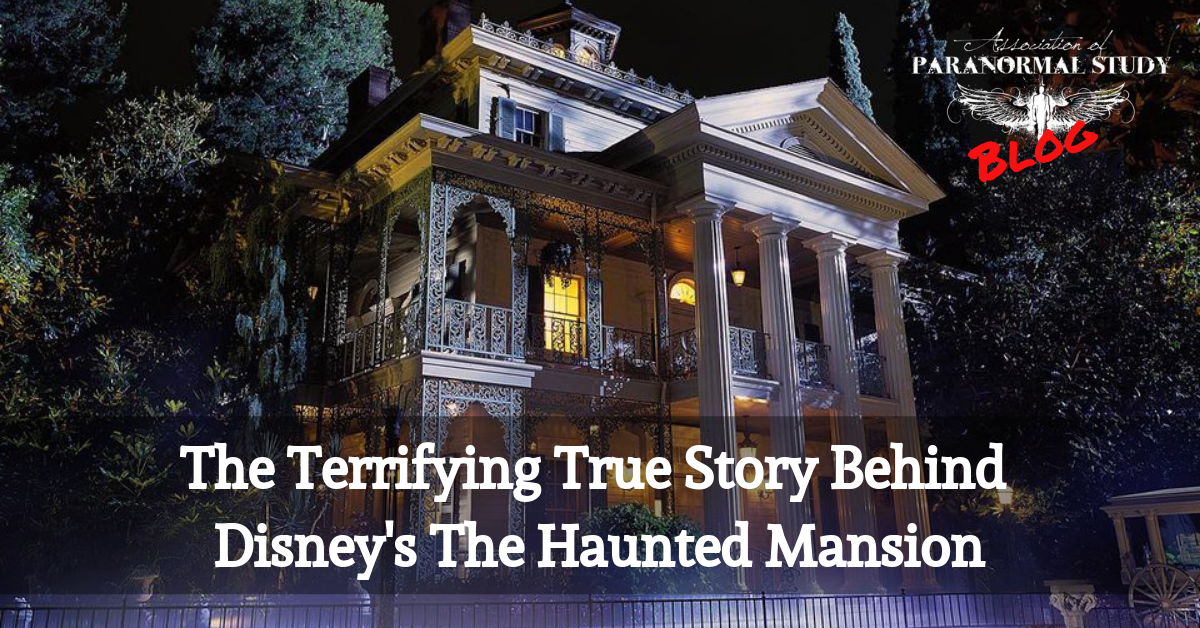 What is the true story of The Haunted Mansion? This famous Disneyland ride is a fan favorite for millions around the world is based on real-life spooks!

I’m a huge Disney fan. Specifically: Disneyland. In college, this was a place I visited more often than I will admit. I was at Disneyland several times per month thanks to the annual pass and the ability to make monthly payments on the pass. I’ve only been to Disneyland Paris and Disney World once (so far). So my little write-up is focusing on Disneyland’s Haunted Mansion.

When it comes to Disneyland (DL) and Walt Disney World (WDW), one of the biggest differences I notice is the exterior of both rides. Since DL’s Haunted Mansion is set in New Orleans Square, the exterior represents a Southern mansion, taking inspiration from the Evergreen House in Baltimore, Maryland. WDW/Magic Kingdom’s Haunted Mansion is part of Liberty Square and has a Gothic-revival style exterior.

Paranormal pop culture is a favorite subject of mine. While I’m looking for ghosts and *trying* to engage in spirit communication, others take a different route. There are those who have taken inspiration from this world and have created something incredible. From horror movies, ghosts in plays, to haunted houses, the paranormal is truly inspiring some amazing stories. One of my favorite rides at Disneyland is The Haunted Mansion, or as I like to call it, “Spiritualism: The Ride.”

I didn’t ride The Haunted Mansion often as a kid. My household is very Christian, and my mom thought the ride was something of the Devil. To give you an idea of the severity, I didn’t read the “Goosebumps” books at home. There’s a reason I read my paranormal-related books in the public library.

The idea for The Haunted Mansion dates back to 1951 when Walt Disney came up with the idea. At first, it was originally thought of as a walk-through haunted house. It was also going to live at the end of Main Street, as Disney wanted the attraction to be that stereotypical haunted house at the end of the road.

The idea was left untouched until 1957, which is when Disney wanted to expand New Orleans Square. Disney found some real-life inspiration to help his process. I LOVE the developmental story of The Haunted Mansion because Disney visited the Winchester Mystery House. This is the house with all of the stairs that lead to nowhere, the multiple rooms, random doors, etc.

Having been a rider on The Haunted Mansion for years, I see where the Winchester House served as inspiration. After literal tumbles, twists, and turns with development, the ride finally opens in 1969.

I want to discuss what I love the most about the ride; Madame Leota and the séance. Seriously, can we talk about how “dead” on this is?

Serpents and spiders, tail of a rat, call in the spirits, wherever they’re at!

Rap on a table — it’s time to respond. Send us a message from somewhere beyond…

Goblins and ghoulies from last Halloween, awaken the spirits with your tambourine!

Creepies and crawlies, toads in a pond, let there be music from regions beyond!

Wizards and witches, wherever you dwell, give us a hint, by ringing a bell!

From the tarot cards floating in the air to Madame Leota’s head in a crystal ball, I find it really interesting that the ride essentially starts off with a séance to summon the 999 happy haunts. Every time I read this to a group of paranormal researchers, spiritualists, and even skeptics, I ask them where the passage is from. I get answers ranging from a historical séance, something from one of Lincoln’s séance, etc. When I tell them it’s the script from The Haunted Mansion, the reaction is always amusing.

Here is a sample séance invocation from 1901:

‘There is a land where we all go,
Where never the frost or cold winds blow.
And friends remembered reunite,
where those who hate, forget their spite.
In glow, surround these gentle beings,
we call you now to bless our meetings,
Heaven’s promise, our spirits thrive,
So now for the living, let the dead come alive.
Greetings spirits, Speak now to us?’

From “The Spirit Speaks! Weekly Newspaper” 1901
~ Revised by Barbara Morris

Past Technology Becoming the Future

As we pass by the ballroom in our Doom Buggies, we see a variety of vignettes. There are ghosts dancing in a ballroom, a ghost blowing out some candles, and other ghostly images. It’s fairly well-known now that this effect was created using a technique called, “Pepper’s Ghost.” Ironically, this technique came about around the same time that Spiritualism’s popularity is on the rise in 1862, thanks to the Civil War. This is because families left behind were trying to make contact with their lost loved ones. It was created by a scientist by the name of John Henry Pepper. It involves a room hidden from the viewer that is illuminated and glass. What we see on DL’s Haunted Mansion are two rooms; one above the Doom Buggy and one underneath.

See this photo for more. This also speaks to me in such a way where I know the Imagineers did their research when it came to developing this ride. They brought about special effects technology that existed in the same timeframe as the rise of Spiritualism itself.

Even the origin story of the bride carries on a very “black widow” or a “Lizzie Borden like” story. Given that hauntings that originated from ax murders are some of the most popular investigation sites today (Villisca, Lizzie Borden, etc.), the storyline fits perfectly in the spooky narrative. At the end of the ride, it is apparent that the bride’s ghost is very much active, and beckons us all to come back as we exit the ride.

At the end of the day, we are finding more evidence of paranormal inspiration in our daily lives without even realizing it. In this case, even something located in the Happiest Place on Earth draws that connection, making the spooky a little more magical.