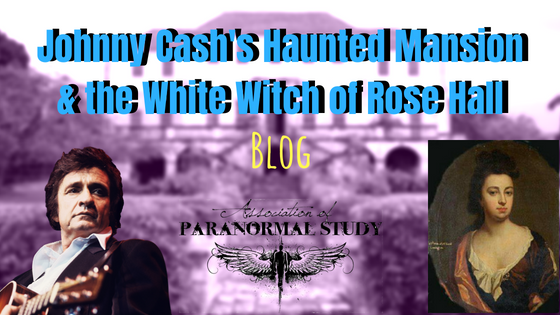 Johnny Cash and his wife, June Carter Cash, were two of the most iconic stars in the music business. They have forever embedded their legacy into our pop culture and society thanks to their music and charity work. While we got a glimpse of their personal lives through various interviews and the hit movie, “Walk the Line” starring Joaquin Phoenix and Reese Witherspoon, there’s another side to the Cash family that not many know about. It’s a tad paranormal as well! Johnny and June owned a large plantation mansion known as Rose Hall Great House of Montego Bay, Jamaica. When disobedient slaves were punished, they were reportedly placed in the dungeon underground and tortured. It was built in the 1700’s and it was one of the few homes to survive the Great Jamaican Slave Revolt of 1831 and 1832. Out of the 700 plantation houses that once stood, only 15 remain today. Rose Hall was one of those survivors. Why? It is believed to be haunted by an angry, restless spirit by the name of Annie Palmer. It is believed that Rose Hall survived the revolt because they slaves were scared of releasing the spirit of the White Witch out onto the world. Or, at least that is what the legends say. The name “Annie Palmer” probably sounds familiar, because Johnny Cash wrote a song about her!

The Beginning of Rose Hall Rose Hall before its restoration

In order to fully understand this legend and haunting, let’s start back at the beginning. Here is the abridged history of Rose Hall as we know it: In 1746, a man named Henry Fanning purchased a 290 plot of land in Jamaica to prepare for his marriage to Rosa Kelly. They were married in 1747. Henry died a few months after the wedding. Rosa Kelly owns everything. But there’s no Rose Hall yet. In 1750, Rosa marries a man named George Ash, who built Rose Hall officially. While some think Rose Hall was named for Rosa, George was also close with the Rose family as well. In 1752, George died after Rose Hall was completed. In 1753, Rosa married a man named Norwood Witter. He ended up spending all of Rosa’s money and left her in debt. He died in 1767. In 1768, Rosa married John Palmer from a neighboring estate. Their marriage was happy and they were married until Rosa died in 1790, and John died in 1797.

Because Rosa and John had no children, their estate went to their sons. They never came to Jamaica to claim their estate, and they never had children to pass the estate onto. So, the estate was eventually given to John’s grandnephew, John Rose Palmer. He took over the estate in 1818.

The Rumor of Annie A portrait of who is believed to be Annie Palmer

Annie Patterson moved to Haiti with her parents from England when she was just 10 years old in 1812. Her mother was English and her father was Irish. One year later, both of Annie’s parents died from yellow fever. Afterward, Annie was placed in the care of her nanny, who taught her everything about Voodoo. That’s where the story gets juicy. At some point, the nanny died and Annie relocated to Jamaica when she was 18 years old.

Through rumor, Annie learned that John Rose Palmer, the owner of Rose Hall Great House needed a wife. She used black magic to cast a spell on the owner and married him. Thus, she became Annie Palmer. She soon started using the slaves as lovers. When John found out about this, he beat her with a riding crop. The next day, he was dead. Legend says that she poisoned him and took over the entire estate. She continued to take slaves as lovers, but then would murder them when she was tired of them. Apparently, she set traps throughout the property for her slaves. If they were ever in the kitchen, they had to whistle to prove that they weren’t eating her food. If they stopped whistling, she would reportedly behead them.

Annie became known as the “White Witch of Rose Hall” by her slaves because of her cruel treatment and practice of Voodoo. She married two more times, with each husband meeting a grisly end. It’s believed that her lover, Takoo (also spelled Taku), strangled the last husband. Annie fell for an Englishman named Robert Rutherford, but he was in love with Takoo’s granddaughter. She cast a spell to eliminate Takoo’s granddaughter from the picture. She cast an “old hige” curse where a ghost would visit the poor girl and cause her to wither and die.

But this is where Annie would meet her end. It is believed that Takoo cast a spell and murdered Annie by strangling her in her sleep for what she did to his granddaughter. She died in 1831, supposedly. That would make her about 29 years old.

When Annie was buried, the slaves were fearful of Annie’s angry spirit coming after them. They burned her possessions so there wasn’t any more attachment. But the ritual to seal Annie’s body and spirit into her tomb wasn’t done correctly, so now her angry spirit roams the lands.

The Truth About Annie What we have here is the perfect recipe for a good ghost story. We have a motive from the main antagonist, and we have a reason to

fear her. It turns out that there really was an Annie Palmer, but her story is so much different and not as interesting. Her maiden name was Annie Mary Paterson, and she was a Jamaican of Scots descent. She married John Palmer in 1820, and was her only husband.

Neither Annie or John died at Rose Hall. In fact, John couldn’t handle the debts and they eventually abandoned Rose Hall. It stood abandoned for 130 years. John died in 1827, after about seven years of marriage to Annie.

When they were at Rose Hall, they only had one or two slaves. After they lost Rose Hall to debt, they lost their slaves too. After John died, Annie sold what was left of their estate for about £200. She passed away in 1846, around her mid-40’s. Another portrait of Annie

We can thank a newspaper clipping from 1868 that actually labeled Rosa Palmer as the White Witch of Rose Hall. That honestly would make more sense to me given the number of marriages she had.

Then in 1911, another story came out about the White Witch, only this time it labeled Annie with the title. In 1929, Herbert G. de Lisser wrote a book called, The White Witch of Rose Hall, with Annie once again labeled as the White Witch. The book was meant to be fiction, but it soon became reality.

I don’t think the writers had any ill will towards Annie. I think this is a perfect example of how fiction and fact can meld into something completely different from the true story. This is how legends and rumors are born. But in Annie’s case, it’s grossly disrespectful to her memory and legacy.

What About the Ghosts?

If there is paranormal activity, it surely isn’t Annie or the slaves she didn’t torture. If there is any activity, it could be from any time in history with the land and the home. It could even be Rosa Palmer and her husbands. We’ll never know for sure.

But here’s the big question; did Johnny Cash have a paranormal experience while he was living at Rose Hall? The answer is yes! During a dinner party one evening, he saw the apparition of a woman in white, she was in her 30’s, and she went into the dining room and towards the kitchen. In fact, Johnny wrote about his encounters with the spirits of Rose Hall in his biography:

“We’ve never had any trouble with these souls. They mean us no harm, I believe, and we’re certainly not scared of them; they just don’t produce that kind of emotion.”

Also, keep in mind that Johnny Cash was a strong Christian. There’s a chance that he wasn’t bothered by the spirits because he felt he was protected by Christ.

As we close out this blog, take a listen to Johnny Cash’s “The Ballad of Annie Hall”

Johnny Cash’s Haunted Plantation Home: What Happened There Will Chill You To The Bone