Aliens: It’s Not That Simple 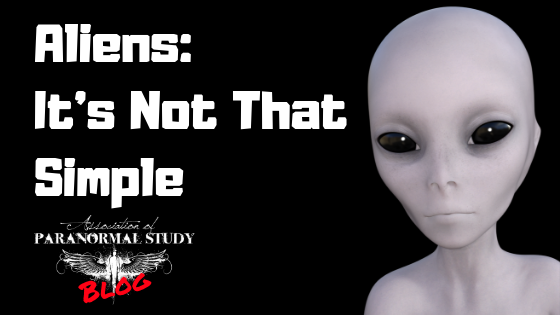 I was putting my kids to bed tonight and my son asked me, “Mom, what scares you?”

I am an avid fan of anything and everything scary and spooky. I have an affinity for serial killers and slasher flics. I’m a paranormal investigator, and I’ve been in a few of the most haunted places in the nation…but, what scares me? If we take politics out of the mix not many things, in fact, frighten me. I’m a researcher, I run towards the unknown, not away from it. There is one thing, however, that makes the hair on my neck rise and affects the way my bedroom is arranged, because I have an irrational fear of being beside windows or doors to sleep. What, you ask, could send this hardened soul into the throws of fear? Aliens. There. I said it. I am deathly afraid of the little grays.

I was about 13 years old when I first read Whitley Strieber’s ‘Communion’ and I was hooked. The thought that there could possibly be another, seriously advanced species, living amongst the stars and casually slipping in and out of our homes and lives just really affected me at a young age. In retrospect, probably too young of an age. These days, Whitley Strieber has been called a hoax; an author just trying to sell books. But in the 80’s and 90’s his accounts of ‘The Visitor’s’ as he called him, spoke to me. When Strieber’s book came out the world of Ufology was set abuzz. Most people were expecting a book full of abduction tales and that is not what they got. Strieber makes it clear that he was not pandering to the worldview of aliens at the time and his ideas gave many in the ufology field pause. He introduced the idea that aliens may not actually be extraterrestrial after all and suggests that maybe they are something so advanced that our basic comprehension cannot grasp it, that we, as humans are simply too basic to understand. He discussed synchronicities, the human soul and the connections between aliens and the afterlife. He also linked aliens with occult, doppelgangers and supernatural experiences and suggested that abductions may not be as they appear. A little Google search will lead to many sites and videos by Strieber. His latest book, The Afterlife Revolution, was released in December of 2017 and there are numerous videos of interviews with him in which he discusses his abduction experiences.

I live in the mountains of Western North Carolina and there is no shortage of UFO sightings in my area, as North Carolina is in the top 10 states in the country for UFO sightings. As of late, it appears that Cashiers, NC has become quite the hotspot for spotting UFO’s and there are quite a few books and websites dedicated to sightings there. The National UFO Reporting Center reports that there have been 2,822 sightings in North Carolina since the 1940’s. Again, a simple Google search will fill your evening with a plethora of videos and commentary on local sightings. I know you are dying to ask so I will answer: Yes, I have seen some things in the sky that are beyond anything that I can explain. Does that mean that I saw an alien spaceship? I wouldn’t exactly go that far but I have seen an unidentified flying object, on more than one occasion. I can promise you that I double locked my doors and laid in bed thinking that if the aliens every looked back at me…my locks wouldn’t matter.

In essence, I believe that is why the idea of aliens bothers me so much. They could be anywhere. They could be the movements in the dark that we call Shadow People, they could be the ghosts that talk to us through EVP’s, they could be responsible for any high strangeness that occurs in our lives. They could also be the figures we call Angels and Gods and that concept could change everything we think we know about religion and the afterlife. Whitley planted it in my head that the more you look into the alien phenomenon the more they begin to look at you and that aligns directly with Friedrich Nietzsche’s belief that you should “Battle not with monsters, lest ye become a monster, and if you gaze into the abyss, the abyss gazes also into you.” It is with that I will leave you. If you are interested in learning more about the alien phenomenon, I will tell you, the truth is out there…. even if we probably shouldn’t look for it.

1 Response to Aliens: It’s Not That Simple