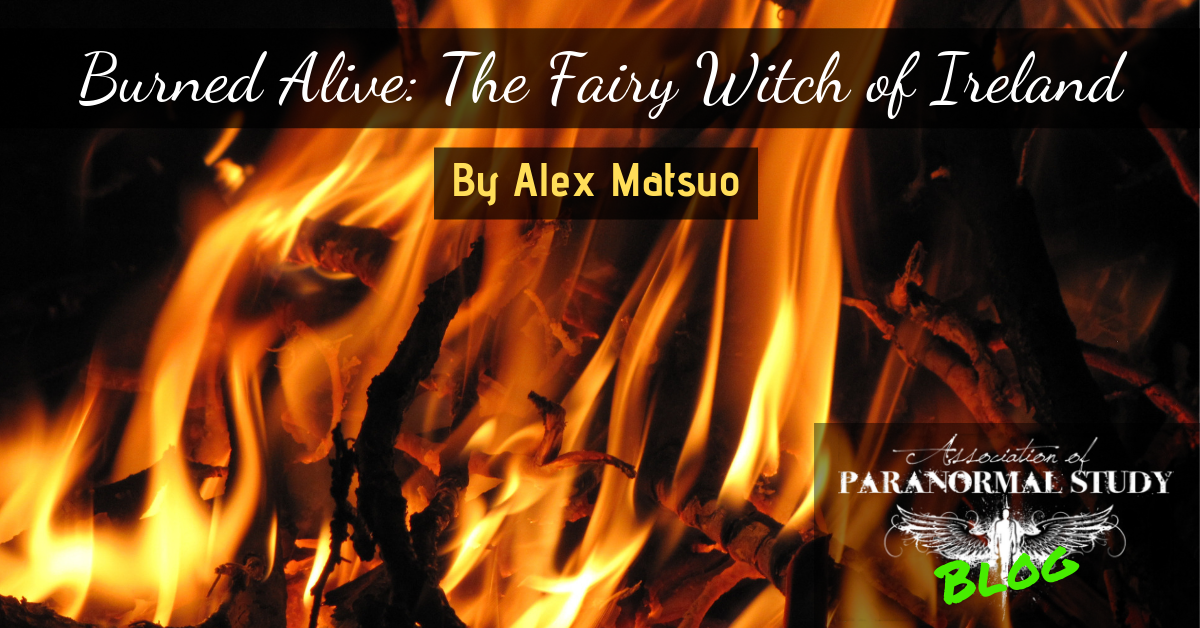 Are you a witch, or are you a fairy? Or are you the wife of Michael Cleary?

We all know about the infamous Salem witch trials between 1692 and 1693. Over 200 people were accused and 19 people were found guilty by hanging. Giles Corey was crushed to death. Society learned a hard lesson after the witch trials. You would think that this lesson would have resonated around the world two centuries later.

The Cost of Blind Belief

Superstitions and belief in the unknown can sometimes act as a crutch for those who don’t know how to explain the circumstances in their life. If someone experiences the loss of their entire family, perhaps it’s due to a curse. If someone loses their money and ends up desolate, perhaps it’s because of karma or some sort of retribution from a just God. If someone’s personality dramatically changes, then maybe it’s because they’re possessed, or they’ve been replaced. While we like to think that this is an outdated scenario, it continues to happen each day. The hardest thing to accept is that things happen without any specific reason or explanation…they just happen. While faith and blind belief can be relatively harmless, it can have deadly consequences should the wrong person dive into a superstition head first.

Roots of a Fairy Tale

Our story takes place in 1895, but the roots of the story go back for centuries. In Ireland, the belief in fairies was prominent. Even the most well-versed, book-read person believed in the superstition of fairies. What is truly fascinating is that Christianity coexisted with these beliefs. Fairies were as real as God. Fairies were perceived to be mischievous and were known to take human babies and replace them with a changeling. The changeling was often an older fairy, and would cause a lot of issues with its new family. If you had a baby that was actually a changeling, there were peculiar traits to look out for; amusement from silly things, constantly crying, or even jumping, dancing, etc. when it thought it was alone. Fairies would also take adults as well and replace them with changelings. Often, if a person was happy and personable one day, and then depressed and/or melancholy the next day, then it was believed that the person was replaced by a changeling.

A Modern Woman in the Wrong Time

In the story of Bridget Cleary, she was a modern woman who fell victim to superstitious belief by a society that didn’t know how to accept her. Bridget was truly ahead of her time. She was self-sustaining, independent, and was ambitious. She was born in 1869 and married Michael Cleary in 1887. Michael was nine years her senior and worked as a cooper. That means that he made wooden containers like barrels, caskets, buckets, vats, etc. She lived in Ballyvadlea, Ireland with her parents after she got married. Michael stayed in Clonmel. While the couple were apart, this is when Bridget became a modern woman. At first, she was selling eggs and chickens to her neighbors. Then, she obtained a Singer sewing machine and became a dressmaker and milliner. For her time, she was a professional woman who didn’t need a man to take care of her. After Bridget’s mother died, Michael and she became responsible for her father, Patrick Boland. Because her father was a laborer in his youth, he was entitled to one of the best houses for laborers. In turn, Bridget and Michael also lived in this house. What is interesting to note is that the house was believed to have been built upon a fairy ringfort.

According to an article on Mental Floss, Bridget herself had a personal interest in fairies, and was known to take detours on her delivery routes to areas that were known to be riddled with fairies. After making a delivery to her father’s cousin, Jack Dunne, on March 4th, 1895, Bridget fell ill. Keep in mind that it was also rather cold, there was snow on the ground, and Bridget had walked around two or three miles. According to the story, she couldn’t get warm and eventually fell ill. She said she had a “pain in her head” and was shivering. Her father ended up calling on Dr. Crean to check on her, but he couldn’t visit until the following Wednesday. Michael had also called on the doctor twice. When the doctor did tend to Bridget, he diagnosed her with “nervous excitement and slight bronchitis.” He hadn’t seen anything that concerned him or make him think her illness was fatal. He never saw her alive again. Some accounts will disagree with this assessment. It is believed today that Bridget may have been suffering from pneumonia or tuberculosis.

You would have thought that Dr. Crean’s diagnosis would be enough to calm any concerns or fears that Michael had. Not quite. Michael was convinced that his wife had been replaced by a changeling or was possessed by a fairy. Father Ryan was called to the house to perform last rites in the event her illness took a turn for the worse. Unfortunately, Jack Dunne, Bridget’s uncle, perpetuated and encouraged Michael’s belief that she had been overtaken by fairies and she was “no longer Bridget.” With Father Ryan performing last rites, it made Michael hysterical and Jack encouraged him to act before he lost Bridget forever.

This is where Bridget’s nightmare began.

Bridget’s family visited a “fairy doctor” by the name of Denis Ganey, who gave them medicinal herbs to help exorcise the fairy out of Bridget, or at least get the changeling to reveal itself so that the real Bridget could be returned. The mixture had to be boiled with “new milk”, which is the milk a cow produces after the birth of a calf. Michael forced the mixture down Bridget’s throat while she was pinned down by Jack and three of her cousins. They also threw urine on her while shouting things like, “Are you Bridget Boland, wife of Michael Cleary, in the name of God?” and “Take it you witch or I’ll kill you!” She was also held over the grate of a fire, which was a known belief to drive out fairies. Neighbors and onlookers outside heard Bridget’s agonizing screams, but were too scared to intervene.

The following night, midnight on Thursday, the ritual was done and Michael was happy. Unfortunately, Bridget was said to be wild and deranged. Wouldn’t you feel similar after going through that? A priest was brought in to banish any “evil spirits” that were left after Bridget’s ordeal. On Friday, March 15th, Bridget seemed to be feeling better. She got dressed as usual and even had tea with her loved ones at their house. But when she requested milk, Michael became suspicious again, Milk was a favorite beverage for fairies. He then forced her to eat three pieces of bread with jam while saying her name. She ate two pieces, and hesitated when eating the third.

He threw Bridget to the ground, kneed her in the chest, stuffed the third piece of bread and jam down her throat, and tore off her clothes down to her undergarments. He then threw lamp oil on her and said, “She’s not my wife. You’ll soon see her go up the chimney.” He hit her head against the floor and set her on fire. He even poured more lamp oil on her to make the flames more intense. There is some conflicting info over what came first, the oil, or the fire. But what matters is that Bridget was burned alive for no reason. She was only 26-years old at the time of her death. She and Michael had no children.

Bridget’s family was horrified and begged Michael to put out the flames. They were soon locked in a bedroom with Bridget’s smoldering corpse and Michael left the house for an hour. When he returned, he threatened Bridget’s cousin with a knife and made him help him bury Bridget’s body. Her body was built in a shallow grave and the family was sworn to secrecy.

But that didn’t last long.

The next morning, Michael and Jack Dunne went to Drangan Church. Believe it or not, after encouraging Michael to take action against his “possessed wife”, Jack ratted him out to the priest and told him that Michael burned his wife. Michael had requested to go to confession while crying and tearing his hair out. Some accounts include Michael talking to the priest about what happened. Either way, the priest reported Michael and Jack to the local authorities. The police searched and found Bridget’s body in the shallow grave. Her head was in a sack, and she was wearing nothing but black stockings and a gold earring.

What is truly tragic in all of this was that Michael believed that his wife would eventually return. He waited on the ringfort for days, believing that Bridget would come in riding on a white horse. He believed he would free her from her rope bounds and she “would be his forever.”

Michael and nine members of Bridget’s family were arrested, along with the “fairy doctor”, Denis Ganey. The judge had ruled out murder because the charged were acting out of genuine belief. After a two-day trial, Michael was found guilty of manslaughter and imprisonment. Jack Dunne, Patrick Boland, and four of Bridget’s cousins were also found guilty. Michael threw Jack under the bus saying that he would never have attacked Bridget had he not told him that she was a fairy. Jack served three years in prison. Michael was released in 1910 and fled to Montreal.

What is interesting is that this case was used as an example against Irish Home Rule. The idea was how could people who still believed in fairies and spirits be trusted enough to govern themselves? There were also rumors that Bridget may have been having an affair. Given that she had lived apart from her husband for a while, it is only natural that these rumors would start. I personally think this was a case of domestic violence and Michael used the common folklore of the area as a way to validate taking Bridget’s life.

How could Michael believe something so strongly that he ended up murdering his own wife? In a case study from 2006 by the Irish Journal of Medical Science, it was concluded that Michael may have been suffering from Capgras syndrome, which is when a person believes that someone close to them is an imposter. Given that there was mythological belief in this concept, and Michael also dealing with the loss of his father, he may have suffered a psychotic break which led him to his actions.

This is a case where someone who was mentally ill received validations and encouragement for his disillusions, and Bridget lost her life because of it.

The Burning of Bridget Cleary: Psychiatric aspects of a tragic tale

1 Response to Burned Alive: The Fairy Witch of Ireland