Home / Investigating / Where Do Zombies Come From?

Where Do Zombies Come From? June 15, 2019 Alex Matsuo
Investigating
1 Comment 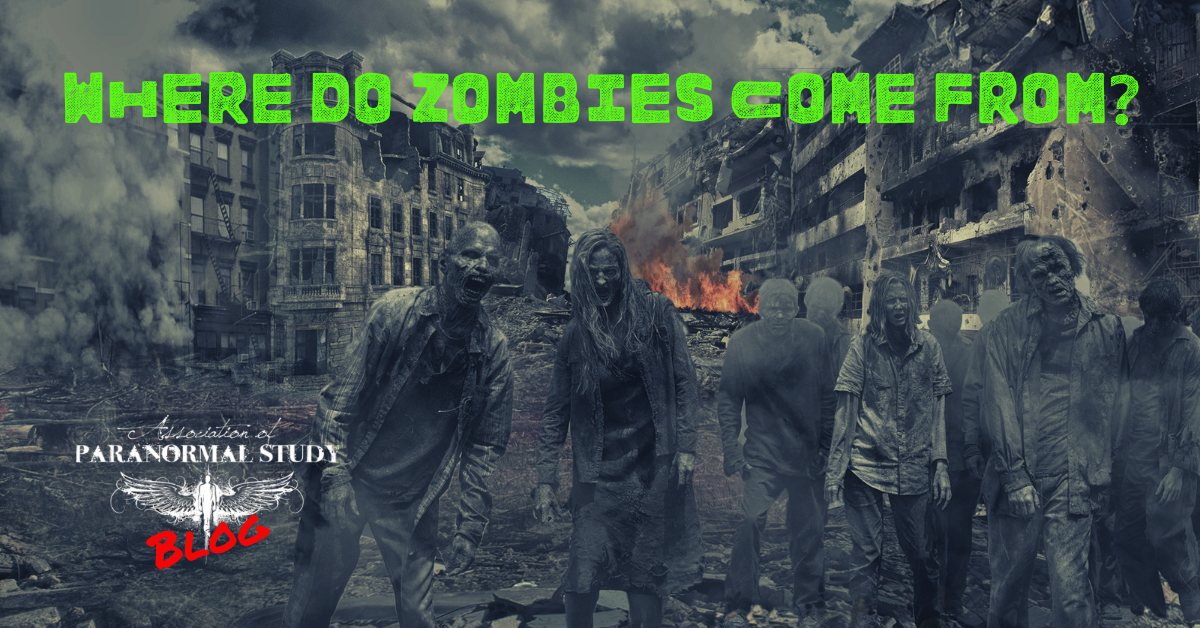 Death can be an unsettling topic. While most of us have an idea of what happens to us after we die, we can’t know for sure. It is from this fear, that we have created our own story of the afterlife. It’s scary to think that one we die, we’re gone. But for centuries, mankind has held on to the belief that the dead aren’t really ever gone. This has inspired different myths and legends, as well as some of the most famous pop culture references we will ever know.

Typically, when we die, we expect our bodies to stay six feet under after our funeral. Or, if you’re being cremated, your body becomes ash and that’s it. However, it seems that the possibility of returning from the grave is a topic on everyone’s mind. From hit television shows like, “The Walking Dead” to several zombie-centric movies like “World War Z”, “Night of the Living Dead”, etc. zombies, or the undead, continue to be a popular topic for the world. What is it about these decaying, flesh-craving corpses that have us hooked?

The answer is quite fascinating. While other monsters are based on myths and legend, zombies are based on true accounts. Yes, that means there is a bit of truth in the zombie lore. Given that the CDC and the military have protocols set up for dealing with zombies, that should tell us about their validity.

What is interesting to note is that “Night of the Living Dead” (1968) as well as “The Walking Dead” don’t ever use the word, “zombie.” For the NOLD movie, they were called ghouls. TWD calls them, “walkers.”

In fact, zombies date back as early as Ancient Greece. While the pop culture belief of zombies tends to stay around the 20th century, zombie lore is much older than that. We just have to change the name to “undead.” When you look at graves from the time period, it wasn’t uncommon to find skeletons with rocks and chains pinning them down into the ground. This shows that the people of the time had a fear of corpses reanimating and coming back from the dead. The Ancient Greeks also believed in something known as a curse tablet, and they bury it in the person’s grave. They believed that tablet would control the walking dead. Basically, the dead weren’t really gone and could serve a purpose.

Then, we have Haitian belief, along with voodoo practices. But also keep in mind that a good majority of the population of Haiti is linked to West Africa. Historians believe that zombie folklore dates back to the 17th century when West Africans were brought to Haiti to work on the sugar cane plantations. These people didn’t leave their homes empty-handed. They brought with them their folklore, culture, beliefs, superstitions, and customs. Sadly, it seems that zombie folklore was a metaphor for the slaves longing for freedom, and becoming a zombie represented the plight of slavery. They no longer had control of their bodies, their lives, how they lived, etc.

They held the belief that the soul and body were connected, and that death was a separator between the two entities. From the viewpoint of slavery, only death would break the link between the body and the soul. Many slaves wanted to return to their homeland by death, making suicide rampant in Haiti. But suicide was not an acceptable way to die. It was believed that instead of that person’s soul returning to Africa, their soul stayed inside their body…making hell an eternal plight of slavery.

There was a name for this…it was “the zombi“.

This word was recorded in 1872 by a linguistics scholar named Maximilian Schele de Vere who described the zombie as a phantom or a ghost. Now, voodoo practices were mentioned. It should be noted that most voodoo practitioners believe that zombies are nothing more than a fairytale. However, there is a special type of practitioners known as bokor, who revive people from the dead. They do this by creating “zombie powders”, which can consist of fish, bones, shells, animal parts, herbs, etc. These powders usually contain tetrodotoxin, which is the same chemical found in pufferfish. And yes, it is deadly.

When used in minimal amounts, they can create “zombie-like” features like lethargy, confusion, and respiratory issues. If used more heavily, they can create paralysis and coma. Can you see a pattern here? If someone goes into a coma or becomes paralyzed, they may be mistaken as being dead. Then, when they come back to life, they might come across as someone who is undead.

In literature, zombies pop up as early as 1697 in “The Undead Eighteenth Century” by Linda Troost. In her text, zombies described ghosts, not necessarily the living dead. George Romero’s 1968 film, “Night of the Living Dead” was truly what sparked our obsession with the zombie phenomenon.

Zombies in the Bible

One could also argue that zombies appear in the Bible as well. But these zombies weren’t recorded as wanting to eat other people. If you look in the book of Ezekial, specifically Ezekial 37: 1-14, the prophet is dropped into a boneyard and prophesizes to the bones. The bones shake and muscle and flesh are added to them. And yet, the bodies don’t breath. Zombies are referenced in 68 different Bible verses, including Zechariah, Matthew, Revelation, the list goes on.

Zombies have a rich history, and they provide some of the strongest social commentary on our past that we will ever see.

New York Times: A Zombie is a Slave Forever

KPBS: Zoinks! Tracing the History of “Zombie” from Haiti to the CDC

BBC: Where do zombies come from?

1 Response to Where Do Zombies Come From?