Durham is a Stranger Thing 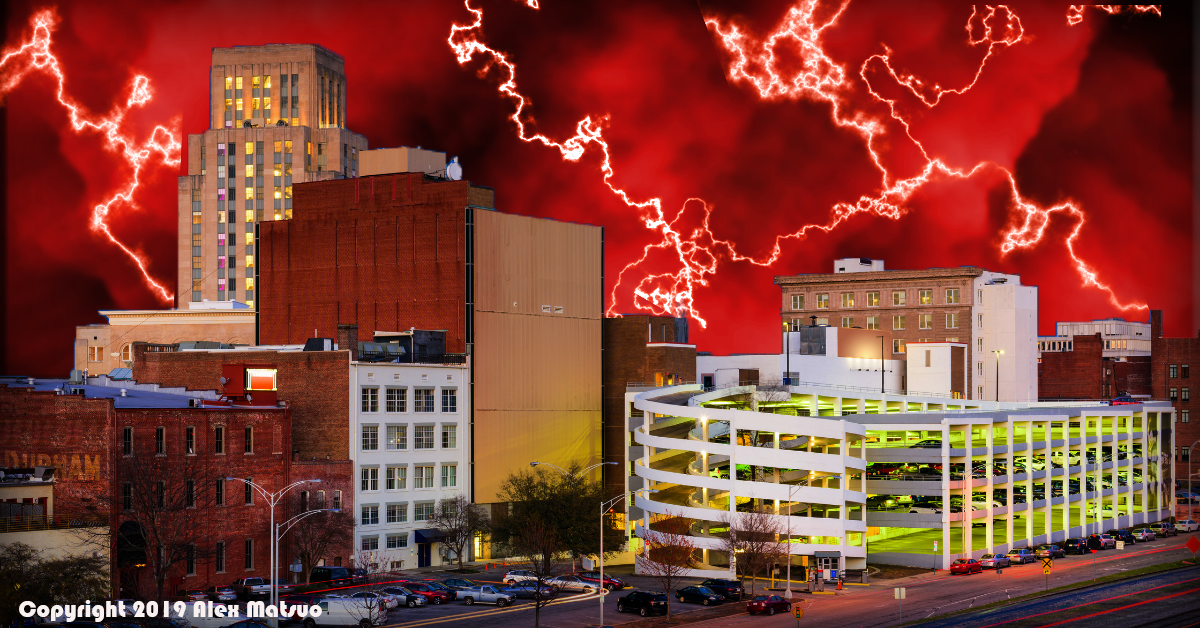 I assure you this article contains no spoilers for season three. I do, however, talk about the connections of the series to the Paranormal, so if you’ve never seen any episodes, you will get a glimpse of what it’s about. However, I don’t think I’m ruining any of the plot elements with the information shared here.

“We can meet at the Motel 6 on Cornwallis.” This was one of many references to my home town that the show Stranger Things has thrown at us. This particular phrase makes its appearance in the first episode of the latest season, and for this happy Durhamite, set the stage for my renewed love of the genius work that is this paranormal series.

I remember a few years ago, as I was perusing a social media feed, people were talking about the show I’d seen advertised on Netflix. The praise for it was coming from like-minded people on my friends list, and I didn’t need much convincing to check out the hot new series.

I watched the first episode one easy Sunday morning and then did something totally out of character for me. Well, I didn’t move for nearly eight hours. I was glued to Netflix. Netflix had not yet introduced its “skip intro” feature, and I posted a lament that I had to listen to the haunting music over and over again while I binged. I also watched “The Duffer Brothers” pass my screen about a million times that day. In my post I included the hashtag “who are the Duffer Brothers?” and I’m so glad I did! Turns out they’re from here, and I am one and two degrees of separation from them.

But it was the second season that really thrilled this Durham native and many others. The show was imbued with references to Jordan Lake, the Eno, Cornwallis Road, and — oh my gawd! — Euclid, which is ONE STREET OVER from my house. What fun romp!

It’s also amazing that we also have the Rhine Research Center in our hometown! They research all things related to parapsychology. Thankfully, they are much nicer and not as shady as the laboratory that was in Hawkins, Indiana.

But the location references, fun though they are, are not why people are so fascinated by Stranger Things. We are, of course, drawn to the paranormal elements that are woven so skillfully into the very human story of relationships and attachments. I promised no spoilers, so we will chat only about the paranormal elements: remote viewing, telekinesis, alternate dimensions, and government conspiracies.

Remote viewing — the ability to see objects that are hidden from view — makes a strong impact on the series. In Stranger Things, water provides the medium for the exercise and acts as a conduit for the information. I’ve heard practitioners of this skill describe their own visualization rituals, and they often describe diving into a body of water in order to access their sight.

If you’re interested in flexing your remote viewing skills, be sure to follow the Facebook site for the Association of Paranormal Study. We post remote viewing exercises in real time, and followers can test their own skills.

As for the telekinesis (also known as psychokinesis), who wouldn’t want the ability to kick ass without even touching your opponent? Shutting doors as you walk through? Moving an object out of your way as you need room for what-have-you? Grabbing the remote or — 1000 times a day — your phone without getting up? Seriously, if I had that power, I would totally abuse it and for mostly simple things. I wouldn’t even need to be particularly powerful at it. Let me just move that pen a centimeter out of my annoying coworker’s reach… Or let me just slide my drink a little closer…

Oh yeah, telekinesis is the power I have coveted since I was a kid.

The other big issue of Stranger Things is the existence of another dimension and the creatures that live there. This topic is, of course, explored by many science fiction and fantasy authors. What is lurking in other dimensions? What would it take for them to survive in ours? Exactly what does a portal from one to the other look like? Can we imagine any positive reason to exploit its existence for our own good?

Even scientists not writing for fiction make a case for alternate dimensions and parallel universes. A simple internet search yields plenty of articles in even the most respected publications. But the stuff of nightmares comes from imagining what the creatures living there look like, how they interact with our space, time, and atmosphere, and what they want from us.

We never open a portal into someone’s kitchen, say, and spy a lovely couple eating dinner… no, we are forever opening portals to creatures, unlike anything we can simply imagine and who are (seemingly) insatiably hungry for us. Let’s just say, you probably shouldn’t watch a dimensional science fiction show late at night…

As a paranormal investigator, I assume the entities we encounter are existing in some version of another dimension. I guess some people call them planes of existence. We too are searching for portals to their world and ways to communicate across the dimensions. These experiences may seem like fantasy fiction to people who overhear us, but like the scientists in paranormal fiction, we are simply trying to understand the things that happen around us.

And that brings us, finally, to the paranormal staple, the government conspiracy. Ideas of black ops funding streams, mad scientists in Federal employ, and secret, underground compounds the size of cities all make for fascinating fiction. Personally, as someone who has worked for government agencies most of my life, we can’t even order paper efficiently, so I’m disinclined to believe we can keep some sort of massive secret. But it sure does make for good fiction!

I hope you’ve all had a chance to enjoy Stranger Things as much as I did. And if you haven’t started it, I hope you give it a try.

Meanwhile, I’m going to be working on those telekinesis skills.

If this intrigued you, and you’re in the Raleigh-Durham area, come to our July 20th meetup at the Richard B. Harrison Library at 1pm! We will be exploring the true story of Stranger Things right in the Triangle!