Huldufólk: The Hidden People of Iceland 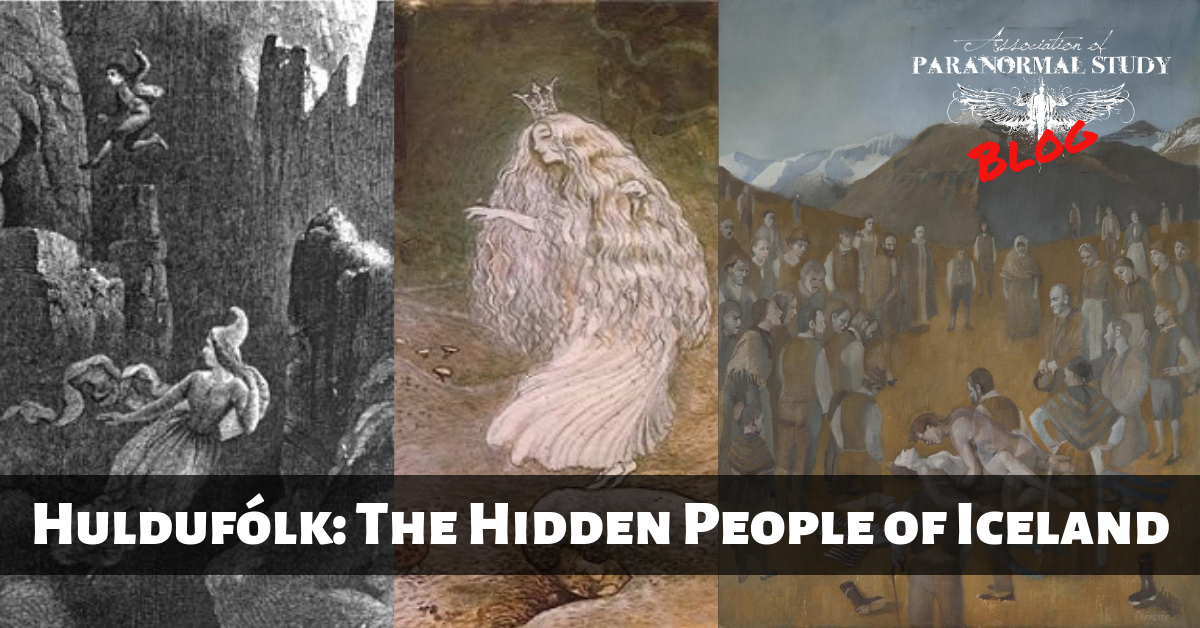 The huldufólk can see you. But you can’t see them! In a survey from 1998, 54.4% of Icelanders believe in the existence of elves. There is a fascination with being invisible. With movies like, “The Invisible Man” and the more modern “Hollow Man”, invisibility has been a topic of interest for over a century. Some of us wish we were invisible in real life especially during embarrassing situations. But for some cultures around the world, invisibility isn’t a wish or a myth. It can actually be quite terrifying. Think of it like this; you’re alone in the woods, and you know someone or something is around you, but you can’t see them. Sure, it could be a ghost. But what if it was a living thing that was invisible?

However, we’re talking about something different…and taller. Stemming from Icelandic and Faroese folklore, the huldufólk are mythical beings that are sometimes synonymous with elves. They live outdoors, and they make their home in the rocks and cliffs of Iceland. They also dress in 19th-century clothing. This is an invisible society of human-like creatures. In 2006, a study on the belief of the huldufólk revealed that 32% of Icelanders believe in the possibility that these human-like creatures exist while 24% believe that their existence is likely or a certainty. Before going further, note that Iceland consists of large volcanic rock formations. Springs and geysers are often boiling, and there is sparse greenery in the area. So, rocks aren’t an uncommon thing for the region.

In 1982, over one hundred Icelanders protested a NATO base while demanding an inspection of the area for any elf dwellings. Construction of roads and neighborhoods revolve around rock formations that may be inhabited by elves or the huldufólk. In 2004, an aluminum company had to halt construction of a smelter due to having to hire a government official to inspect the area for elven dwellings and ruins.

In 2013, a large road was under construction on the Alftanes Penninsula to connect the island to a small town near Reykjavik. However, there was a 12-foot high rock, weighing 70 tons, that was blocking the progress of the construction project. However, the construction crew couldn’t just destroy the rock and move the pieces to the side. It turned into quite a dispute that took two years to resolve.

The government actually had a crane move the massive rock in two pieces to a safe location. According to campaigners and Iceland’s Supreme Court, the rock is an “elf church”, or a structure that is a place of worship by the huldufólk. A seer by the name of Ragnhildur Jonsdottir spoke for a pact between elves and men.

In short, Icelanders take this belief very seriously. You can see more examples here on how Icelanders have constructed homes, apartments, and even entire towns around these rocks.

All good myths, legends, and folklore have an origin story. They are the very fabric of what our modern society believes in today. Writings about these hidden people go back to the 18th and 19th centuries. When it comes to elves, we typically think that elf folklore came from the Vikings. When they were pillaging, invading, taking over, etc. there was also a community to invade. But there are theories that suggest that when the Vikings arrived in Iceland, there wasn’t much of a population. So, the elves had to fill in that gap.

But what about the huldufólk? There’s a legend that has their origins going back to the times of Adam and Eve. Apparently, Eve had several children. One day, God came to visit and had asked to see all of the children. Eve wasn’t finished bathing the children, so she only showed God the clean ones and hid the dirty ones. When God asked if there were any more children, Eve said no. But, since we know that the Biblical God is all-knowing and all-seeing, He found out about the children and made them invisible. This was all done under the guise, “What man hides from God, thus God hides from man.” The invisible children went off to live in the great outdoors in the hills and moors.

There are dates associated with the huldufólk activity as well. On New Year’s Eve, it is believed that the huldufólk move to new locations. There is also Midsummer’s Night when the huldufólk will give you gifts and money if you stand at a crossroads late at night. But, you don’t want to accept these gifts because it means certain misfortune will come your way.

A Spirit Without a Body

This is where my paranormal researcher-self gets excited. I had already begun making connections between ghosts and the huldufólk when I ran into this other origin story:

A man had been traveling and found a farm that he had never seen before. He knocked on the door and an old woman answers the door. The man asks to stay the night and the woman obliges and introduces him to her two beautiful daughters. The man (boldly) asks the woman if one of the daughters could keep him company for the night, and again, the woman says yes. Don’t worry, the woman wasn’t willingly letting her daughter sleep with a stranger.

Anyway, the man goes to bed and one of the daughters lays beside him. He tries to embrace her, but his hand passes through her body. She has no physical form.

When the man asks the daughter why this happened, she said that the Devil and his army revolted against heaven a long time ago. Those who supported the devil were driven into darkness. The ones who neither opposed or supported the devil were sent to earth to live. She explains that she is a spirit without a body and can be seen in her human form when she chooses to.

So, what if ghosts are living people without a physical body to touch? Or, what if the huldufólk are people who are in an alternate dimension and our interactions with them are purely random and by chance? I sometimes wonder if instead of reverting to the belief in ghosts and the afterlife, the Icelandic folks instead believed in having encounters with the huldufólk.

Apparently, the huldufólk live life just like humans. They have societies, politics, communities, relationships…basically living life exactly the same as we do. Larissa Kyzer has a wonderful list of stories of the huldufólk as well as legends associated with them.

The Truth Behind Iceland’s Obsession with Elves

Why So Many Icelanders Still Believe in Invisible Elves

2 Responses to Huldufólk: The Hidden People of Iceland