10 Most Haunted Places in Gettysburg 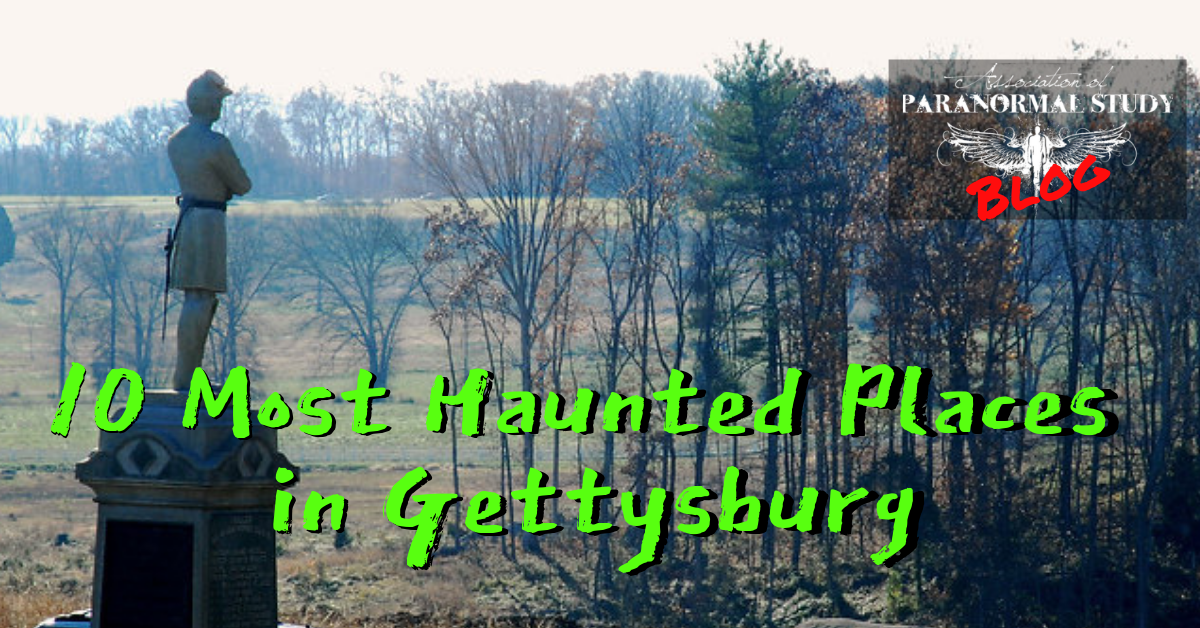 Gettysburg is not only known for its rich history, but it is also known as one of the most haunted places in the world. When it comes to haunted places, Gettysburg, Pennsylvania is a favorite for APS.

It seems that you can throw a rock and wherever it lands, there is a haunted legend associated with it. If someone tries to tell you only certain parts of this town are haunted, they are limiting themselves. The Battle of Gettysburg impacted every inch of that town. It’s hard to believe that only a few spots would have been ghost-free. The hauntings aren’t only by Civil War-era ghosts. There are hauntings that are much more recent. We’re talking as recently as the 20th century.

There are so many companies offering ghost tours and investigations, it can be hard to decide which on to go with. Some of my favorite people to work with are Pamela and Steve Barry of the Gettysburg Ghost Exchange. I also love with with Ghostly Images of Gettysburg, who have access to some of the coolest places in town. Gettysburg Ghost Tours has always been great to work with as well.

Now, here are ten of the most haunted places in Gettysburg!

This place has been a favorite of APS for years and one that I will continue to visit every time I’m in the area. The orphanage opened in October of 1866 near Cemetery Hill. It was created by Dr. John F. Bourns, who saw a need for the facility after realizing that the casualties of the Civil War resulted in a rise in orphans and widows. The homestead was used to house the orphaned children of Union soldiers. What is interesting is that the orphanage also opened as a home for widows.

The orphanage did well in its first years. Ulysses S. Grant even visited the orphanage in 1867. In 1870, the state of Pennsylvania used a bill to fund the facility. However, the headmistress was eventually replaced by Rosa Carmichael, who turned out to be abusive. She became known for having a dungeon in the basement for disciplining children. She would have the older children abuse the younger children, and the orphans were chained to the wall at times.

If you want to investigate the orphanage, contact Ghostly Images of Gettysburg. They’re wonderful people to work with!

I’ve stayed at the 1863 Inn of Gettysburg a few times. It’s actually one of my favorite places to stay because it’s right in the center of the action. At least in the ghost hunting sense. Right across the street, you have all of the ghost tourism companies as well as delightful shopping areas. Not to mention, this hotel is literally right next to the Jennie Wade House. The buildings almost touch each other. It’s also a great place to stay so you can have access to a bathroom in between ghost hunts. Yet, there is also a decent amount of paranormal activity here.

I can only speak from personal experiences. When I stayed there with two of my team members, one of them is Amy, who is our resident psychic medium, we had weird experiences individually that we were able to correlate with each other. From creepy figures appearing in our dreams to hearing menacing sounds in the middle of the night, we ended up sleeping with the light on.

The Jennie Wade House today stands as a memorial to the 20-year old young woman it was named after. Jennie (Ginnie) Wade was the only civilian casualty during the Battle of Gettysburg. She was visiting her sister, who had just had a baby, and ended up stuck there when the battle ensued. She was kneading dough to make bread for the Union soldiers when a stray bullet went through the door and hit her in the back.

Jennie died instantly. Because the family lived in a duplex-style home, Union soldiers had to carry Jennie’s body up to the stairs, make a hole in the joining wall, and carry her down to the basement. Today, it is believed that her estranged father haunts the basement. There are also reports of cold spots, footsteps, shadows, and more in the house. Perhaps, Jennie has yet to leave the house. On the second floor, you can see where bullets and cannons that had hit the house. One can only imagine the horror her family felt as they mourned her death and also living in fear as they heard the battle sounds outside.

Like the orphanage, if you want to investigate the Jennie Wade House, get in touch with Ghostly Images. I mentioned in the introduction that not all of the hauntings in Gettysburg were from the Civil War. In 1985, the town of Gettysburg was shaken up by the murder of Debra Louise (Debbie) Harman. She was only 31-years old when she tragically lost her life. She lived in a second-floor apartment on Baltimore Street when she was shot in the neck by Donald Richard Painter. The two had lived together in the apartment at the time of Debbie’s death.

Gettysburg Ghost Tours currently has access to the apartment, which has been dubbed as the Harman Murder House. From our experience there in 2017, we had team members see and hear someone walking up and down the stairs. The apartment is completely empty, which also amps up the creepiness to the place. Plus, since the murder happened in 1985, we’re talking less than a century, which might also make the place feel more disturbing. Could Debbie be walking up and down the stairs, wandering aimlessly around her former home? Tillie Pierce became famous for writing a book on her experiences during the Battle of Gettysburg as well as its aftermath. The Tillie Pierce House is considered to be one of the most haunted inns in Gettysburg. My experience was interesting because I did the Ganzfeld Experiment on the second floor. Granted, my nerves were high, and I was totally anticipating a ghost. So…perhaps my experience was more than a bit biased. Common reports include hearing footsteps from the Blue Room. The source of the steps? The attic. The Blue Room seems to be the center of the activity, as a soldier has been seen walking up the stairs and then going into this room before disappearing. Guests at the inn have also reported someone sitting on their beds while they slept or staring at them from the foot of their beds. Devil’s Den is considered one of the most haunted spots in Gettysburg. When you consider how many haunted places there are in the area, then this title is a big deal. Not only that, but it is considered to be the location of a malevolent, or more negative, haunting. This is because Devil’s Den played a major role in the second day of the Battle of Gettysburg.

Keep in mind that this was considered to be the bloodiest day of the battle. Devil’s Den flipped flop between the Union and the Confederates. Even with all of the rocks providing some protection, there were many casualties. Numerous corpses were left to decay after the battle, which inspired some of the most memorable photos taken after the battle. Sachs Covered Bridge has quite a sad story to it, as well as some interesting legends. The most popular legend was that three Confederate deserters were hanged next to Sachs Bridge, and people report still seeing the corpses hanging from the limbs. There is also a story where the injured Confederates were resting next to Marsh Creek, which Sachs hangs over.

After the battle, it rained quite heavily, which caused the creek to overflow, thus drowning the injured Confederates who couldn’t get out. The bridge was used by both the Union and the Confederates. In fact, the Confederates crossed the bridge as they were retreating. The bridge we see today is not the original one. It was destroyed in 1996 because of a storm. It was rebuilt with the salvaged materials.

If you decide to go investigate it, know that there will be a lot of environmental contamination. While it sits on a quiet part of the battlefield, there are tons of tourists who are also doing their own ghost hunts. The Battlefield Farmhouse was used as a field hospital, mainly for the Union. It was reportedly used as a headquarters for a Union general as well. We investigated this place in 2017, and there were a few interesting experiences. The foundation of the house dates back to the Civil War, and everything above it dates to the 1980s, so the development is somewhat newer. We investigated the farmhouse with Gettysburg Ghost Tours. The Farnsworth House is supposedly home to about 16 spirits. There are still bullet holes that can be seen on the interior of the building. It is believed that the stray bullet that killed Jennie Wade came from the Farnsworth House. Like the majority of the houses in town, it was taken over by the Confederates, who used the second story as a base for sharpshooters.

There is a nurse named Mary who still haunts the house, still tending to the ill and injured. There is also a boy named Jeremy who is heard sobbing in his room after dying from an injury. There is also a midwife who has been reported to “tuck in” the guests at the inn. The smell of cheroot can still be detected as well as the sound of heavy breathing.

The Farnsworth House has regular investigations every week as well as walks on Cemetery Hill and other areas nearby. The Daniel Lady Farm is historically known for a few things. The barn was used as a battlefield hospital as well as being the headquarters of Confederate General Issac Ewell. There were about 10,000 troops that camped around the area. The barn itself was the site of numerous amputations, surgeries, and deaths. My personal experience at the Daniel Lady Farm was with John Sabol and his team.

When we investigated the house, the sensitives in the group picked up on an injured Confederate soldier. In the attic, the children of the family that lived in the house were active. There were also screams, gunshots, shadows, and other cries for help.

In the end, John had the women hold lanterns and walk the grassy area around the property, where we called out the names of Confederates who may have served. We all felt hands tugging our dresses like these soldiers were begging for help.

The Gettysburg Ghost Exchange was also working with us on having access to the Daniel Lady Farm for an investigation a few years ago. They have a lot of options, and their storefront is also haunted!

There are so many places! We will definitely be doing a part two after some onsite investigating.

Have you visited any of these haunted places? Tell us in the comments!

4 Responses to 10 Most Haunted Places in Gettysburg